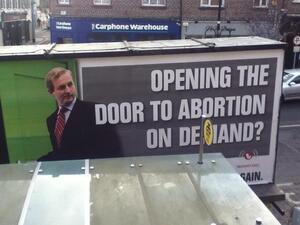 I know I shouldn’t comment on all this tripe, get involved in the arguments, but I need to state this:

I have had 3 terminations; they have not scarred me or ruined my life. I also have carried pregnancies to full term; and i am raising these children.

I think that due to lack of option, and the economic costs involved, women in economically disadvantaged circumstances are in danger of having no other option but to carry through a pregnancy that will disfigure their bodies, and severely impact their mental health and wellbeing for the rest of their lives.

I do not, and never will regret my terminations; I couldn’t have raised those children, and the children I already had would have suffered on many levels through my pregnancies and subsequent baby/toddler stage. The pregnancy itself was the biggest problem; the exhaustion, the physical effect on movement etc.

A tiger will abandon her cubs when there is no food, and conceive again next season. A hamster will eat her babies if her cage is too small. A sow likewise. If a woman finds herself pregnant despite her best efforts, and does not want to continue the pregnancy, this is her choice.

If these people with control issues really do not want women to be having abortions , perhaps they should be out there working to improve the conditions facing mothers; I for one, as a single parent, have never met any of these pro-lifers in any organisations that try to help disadvantaged families.

With 7bn+ humans on an overcrowded planet facing unprecedented climate change, we really really need to start controlling our population. As the late, great Bill Hicks said ‘Hows about having a neat world for kids to come to…?’