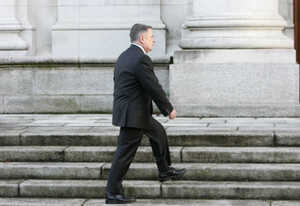 He [Brendan Howlin] has always insisted that it is not legally possible to target this group for further cuts but declined to even call on them to give up some of their lucrative pensions voluntarily.
It came after the Irish Independent revealed that former Taoiseach Bertie Ahern has been taking his full €150,000-a-year pension since he left the Dail, after reversing his decision to give part of it back.
But Mr Howlin avoided putting pressure on the former ministers when asked if he would call on them personally to give up some or all of their pension to the State.