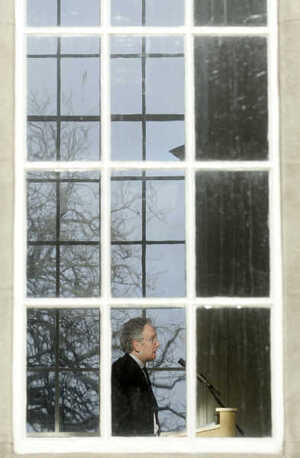 Fintan O’Toole (above) has proposed a ‘citizens’ petition’.

With the following wording:

“As citizens of Ireland, we believe that the payment of €3.1 billion a year, every year until 2023, for Anglo Irish Bank and Irish Nationwide is reckless, immoral and unjust. These ‘promissory notes’ have imposed the debts of now-defunct private institutions on Irish citizens as a whole. These are debts which we cannot, should not and will not pay.

“We therefore instruct our Government: (a) to declare by March 17th, 2013, that it will not make the payment of €3.1 billion due on March 31st, 2013, and to inform the European Central Bank that it will no longer co-operate with this unjust imposition of private debts on the Irish people.

“(b) not to enter into any arrangement with the European Central Bank that involves any acceptance of a duty to pay these debts and/or any substantial payment of Irish public money on foot of the promissory notes.

“We further declare that unless the Government makes this declaration by March 17th, 2013, we will engage in peaceful and dignified mass protest in a form to be decided by ourselves collectively.”

The non-affiliated/sponsored, volunteer-run petition site – OurIreland.ie – goes live within the next few days and will be open to “verified individuals who declare themselves as Irish citizens”.