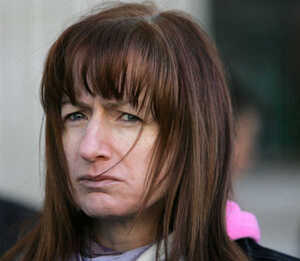 Following her arrest for “drink driving”.

…I was brought in a patrol car to the Kilmainham Garda Station – within 300 metres distance. At one point I was placed in a cell on my own. A doctor was called and I provided a urine sample. When I was released a female Garda told me to ‘come back when you are sober’.

I believe that the Gardai implementing road safety have a job to do and I support them. However, I object strongly to the arrest, handcuffing and release of information re the arrest on suspicion of drink driving to the tabloid press early on Tuesday. My legal advice is that none of this is ‘procedure’.

I believe that this was a deliberate attempt to discredit a left-wing TD who has raised issues of malpractice within the Garda Siochana. This information could only have come from within the Gardai.

The Garda Ombudsman is investigating this matter, as a criminal investigation under Section 98 of the Garda Soichana Act 2005. This is a very serious issue. Every citizen is entitled to their good name and to have their privacy respected.

Garda whistle blowers who have quite correctly approached the designated Confidential Recipient and elected TDs, as they are lawfully entitled to do, have been threatened that they will be fully investigated in accordance with the Garda Siochana (Discipline)
Regulations 2007 for speaking to a third party.

I now expect that the same enthusiasm will be taken in relation to those who have sought to damage me.

I have received the official result of the test on the urine sample provided and the result is 45 milligrammes per 100 millilitres of urine, which is 33% below the allowable limit – 67 milligrammes.

On A Clare Day