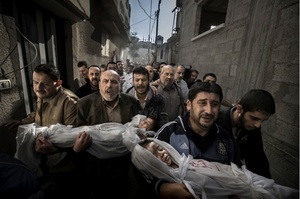 A group of men carrying the bodies of two dead children  to a mosque for the burial ceremony while their father’s body is carried behind on a stretcher. Two-year-old Suhaib Hijazi and his older brother Muhammad were killed when their house was destroyed by an Israeli missile strike. Their mother was put in intensive care.