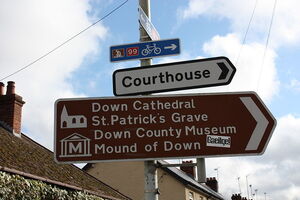 Sarah de Búrca writing for TheDetail.tv reveals the Northern Ireland Tourist Board (NITB) will proceed with a £1m tourist signage project with Down District Council as long as the signs are solely in English.

The council wanted the signs to be both English and Irish.

The NITB insisted that it would withhold the funding if the council pressed ahead with bilingual signs. The reason? 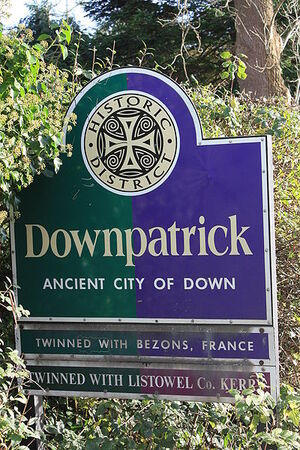 The ban comes despite most of the nameplaces on the island, including Downpatrick (Dún Pádraig) being Irish in origin.

Not to mention the cross-border language authority called Foras na Gaeilge which is tasked to promote the Irish language and paid for by taxpayers, north and south.

Or The Good Friday Agreement (1998) which committed the Government to ‘recognise the importance of respect, understanding and tolerance in relation to linguistic diversity, including in Northern Ireland, the Irish language, Ulster-Scots and the languages of the various ethnic minority communities, all of which are part of the cultural wealth of the island of Ireland.’

And lest we forget The St Andrew’s Agreement (October 2006), which committed the UK Government to work with the incoming Executive to protect and enhance the development of the Irish and Ulster-Scots languages.

Which was consequently included in amendments to the Northern Ireland Act 1998, placing duties on the Executive to adopt a strategy setting out how it proposes to enhance and protect the development of the Irish language and Ulster-Scots culture, heritage and language.

But hey, what do we know?

Why is Irish Being Banned From Tourism Signs Here? (The Detail)