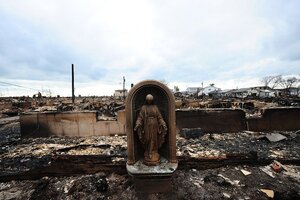 There literally isn’t one.

Yesterday’s New York Times extolled the kindness of the Irish towards the residents of hurricane-hit Breezy Point in New York.

“But complicating the current embrace from abroad is the gated community’s extreme insularity. Breezy Point is the whitest neighborhood in the city, a demographic makeup that critics say illustrates the enclave’s entrenched xenophobia, a dark flip side, perhaps, to all that ethnic pride.

The consul general of Ireland, Noel Kilkenny, said he and others had made special efforts to avoid the impression of “the Irish looking after their own.”

“Over 63 percent of the 4,381 people in Breezy Point and nearby Roxbury are of Irish descent, including a large number of police officers and firefighters who live in bungalows and one-bedroom homes. That connection became well known in Ireland after Sept. 11, 2001, when the community lost dozens of residents in the attack.

“After 9/11, we became very aware of where the Irish were living,” said Anthony Kearns, a member of the Irish Tenors who sang at the Christmas luncheon. “After Hurricane Sandy it became highlighted even more.”

“Its ethnic and racial makeup has also been a source of controversy. It was once called an “an apartheid village” by the Rev. Al Sharpton during a protest.

Steve Greenberg, the former chairman of the Breezy Point cooperative’s board, said that to his knowledge, no black family had ever held a share in the private community. Even in the days after the storm, volunteer firefighters in the community repeatedly told a visitor as she left to beware of the residents of Far Rockaway, the predominantly black neighborhood at the other end of the peninsula.”

“Concerns over the community’s insularity have been privately broached by the Irish coming to the aid of Breezy Point.”

Queen Elizabeth I: Student Of Irish