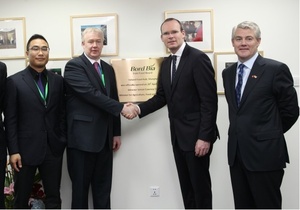 Paul Finnerty, the chief executive of [Larry] Goodman’s ABP food group, will [today] give evidence to MPs on the environment, food and rural affairs committee – inquiring into the horsemeat scandal – after it emerged that the company supplied Tesco with beefburgers that turned out to be 29% horse.

An ABP factory in Tipperary supplied the meat that was made into fresh beef bolognese sauce for Asda that the supermarket found to contain 5% horse. ABP’s Scottish factory also supplied beef meatballs to Waitrose that the retailer found had up to 30% undeclared pork.

…Today’s Irish government is also facing criticism that it was too slow to inform others and had remained close to its beef industry.

Britain’s environment secretary, Owen Paterson, has said his current Irish counterpart, Simon Coveney, only told the UK of the problem in January, rather than when it first became aware of it in November. Coveney’s brother Patrick is chief executive of Greencore, an Irish food processor that made the Asda bolognese sauce found to contain 5% horse. Greencore, however, says its own tests on the same beef batch came up negative for horse DNA.