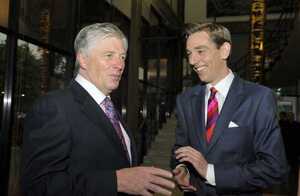 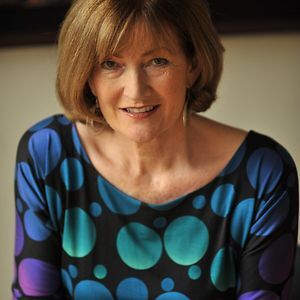 Mairéad Ní Nuadháin: “Well, what it is, Mary, in reality is, it is the culmination of exactly what the director general promised when he made the commitment, in 2011, that all the top presenters’ fees would be reduced from, by up to 30%. And we’re happy to say today that that has been achieved.”

Wilson: “And is that a good deal for the audiences? And for RTÉ, is it a good deal for RTÉ itself? This is an organisation with deficit that’s running into millions. So how can you defend paying presenters salaries of 3, 4, €500,000?

Ní Nuadháin: “Well, as you said, it’s an organisation with a deficit. And we have a commitment also this year to break even by the end of the year. So it’s really part of the bigger picture. We have made cuts right across the boards and in so many areas. Not just in presenters’ salaries but, you know yourself, we’ve lost nearly a quarter of the workforce Mary, over the last four years. So it’s a very big picture and I think we are working exactly as you said: for the audience.”

Wilson: “You see, on programmes like this every day, Mairéad, we interview people, ehh and they’re talking about the excessive salaries that they see being paid to the chief executives of semi-State organisations, of public service organisations and the salaries being paid to banks that are owned by the State and they then come and they look at the salaries that RTÉ are paying to its top earners and they go ‘where’s the fairness in this?'”

Wilson: “People are struggling to pay the licence fee at the moment, among many other bills that come into their home. And they look at these figures and they think ‘why should I pay a licence fee to pay out these type of salaries to top ten earners in RTÉ?'”

Ní Nuadháin: “Well, they’re not paying their licence fee towards the salary that was there in 2008. Look at the figures that were there for 2008. And then, perhaps for a moment, just think of the presenter and look at it from the perspective of the presenter who’s taken, in one case, a cut of 49%…”

Ní Nuadháin: “I’m not asking people to have sympathy because I think that would be incorrect. I’m just saying, in terms of facts, in terms of what has happened, it is a substantial percentage cut. And RTÉ and these negotiations, which are negotiations with real people, Mary. Mary, people who work hard everyday in television and radio, who have had long negotiations with RTÉ to bring these figures down to where they’re at today. Yes, I think it is a good day that we are able to announce that we have achieved…”

Ní Nuadháin: “It’s the figure that’s there today. I’m not able to say what will happen in the future. RTÉ takes its responsibilities very seriously, to achieve a break-even this year. To not run a deficit. We have to look at all our operating costs. These, these figures today represent 1% of our operating costs which we have reduced by a very, very substantial sum overall.”

Wilson: “RTE staff, you said 400 people have left the organisation, there’s still an awful lot of staff here, the people behind the scenes, they’ve all seen substantial reductions, ranging up to I think 12.5%. Are they likely to be reduced further?”

Ní Nuadháin: “I can’t really say what will happen in the future. I think it’ll be unfair of me to say something that will be just a buille a faoi thuairim because RTÉ is in the unusual position, as I said, of being also reliant on commercial income. We’ve taken a huge hit on commercial income in radio and television, in every source of commercial income, it has gone down. All the other media in Ireland have the same story so it’s very difficult to predict what our financial situation will be exactly in the years to come, Mary.”

Wilson: “But you said RTÉ has to break even this year.”

Wilson: “Will RTÉ break even this year?”

Ní Nuadháin: “Well, it’s only March. But I can say that it looks very much likely we will break even this year, yes.”

Wilson: “Now, the organisation had to close the London office. We’re seeing a number of the regional studios being closed or reconfigured in some way. And again I come back to this. You know, defending paying out salaries like this when you’ve been cutting off what is the public service organisation. A public service broadcaster, its regional studios which give access to the country, to..”

Ní Nuadháin: “Nothing has been cut off, Mary. Where has there been a cut off?”

Wilson: “They are being reconfigured.”

Ní Nuadháin: “But there’s been nothing as cut-off..the service. The service from London has been, as far as I can see over the last number of weeks, all the stories from London were extremely well covered. All the stories from the UK. Closing an office is one thing. We’ve had to make some very, ehm, deep cuts in a lot of our services. I was visiting the Fair City set today and the executive producer was telling us the cuts that she’s made. Now their operating costs, whilst still staying on the air. That’s the story across the board.”

Wilson: “And when reporters in this organisation go out to ask hard questions of those who are perhaps earning salaries that are perceived to be too high. Do you think they have a credibility asking those questions when that can be shot back up, at them that ‘you have presenters in your organisation earning these six-figure sums’.”

Ní Nuadháin: “If people wish to shoot that back at us, that is their perogative, I wouldn’t say they can’t. I wouldn’t say they shouldn’t. We are dealing with a historical fact here. And I will bring you back again to what it was: look at the figures, what they were in 2008. They have been brought down substantially. There’s nobody here today saying, this is where it will all end.”

Wilson: “They have been brought down substantially but from…”

Wilson: “But from, would you accept, from a very high starting point?”

Wilson: “And will they come down further do you think? People see them stillas very high salaries.”

Ní Nuadháin: “It would be very unfair of me because we’re talking about real people here. We’re talking about negotiations that will go on, that real people who have jobs and, eh, an income that they know they have for this year. As you can see, very unusually this year, we’ve published also the present negotiated figures. Usually we wait until we have an audited figure of what people earned in a given year. But, in order to be completely open and transparent with our audience, we’ve given them the up-to-date negotiated figures. So that’s really quite unusual.”

Wilson: “And didn’t the Director General, eh, Noel Curran, last year promise that not only would the top ten salaries be cut but also those earning fees outside the top ten. Is that happening as well?”

Ní Nuadháin: “I think our audience figures for radio, for television, for online, reflect the value that our audience thinks they’re getting for their investment, whether it’s through their licence fee that they pay or the commercial income that they might pay through indirectly. I think that’s the final arbiter. People are watching, people are listening, people are going online to all our RTÉ services everyday in very, very great numbers.”