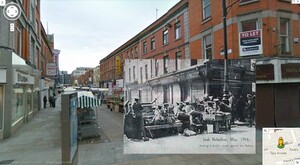 Then, in case you missed it last October, you may want to watch a repeat of Scun Scan’s documentary Iniúchadh Oidhreacht na Cásca on TG4 at 8.20pm.

It traces the complex events which led to revelations that a secret deal was made between Dublin City Council management and developer Joe O’Reilly, from Chartered Land, involving a site in the Upper O’Connell Street area of Dublin. The site includes 14-17, Moore St, a national monument since 2007.

The land was previously owned by a group of landowners, called the Carlton Group, which included architect Paul Clinton. The group got permission in 1998 to build a Millennium Mall on the site but, three years later, the council issued a Compulsory Purchase Order on the site. Mr Clinton appealed the CPO in court.

The documentary recalls that Mr Clinton told the High Court he felt that if he didn’t bring in Keelgrove Properties – a sister company of Treasury Holdings – as co-developers, then his site would be CPOed and he’d never get his development off the ground.

During the High Court proceedings, in February 2004, it emerged Dublin City Council management had made a secret deal with Chartered Land.

Under the terms of this agreement, the council had agreed that if Chartered Land developed the site within 10 years, the council would not enforce the CPO order.

Dublin City Councillors were furious over the revelations as the  decision had apparently been made without their consent.

In the summer of 2006, several meetings took place between the council and council management in regards to the deal. In November of 2006, an in camera meeting took place, in which councillors were warned not to speak of what happened in the meeting, outside of the meeting.

In the documentary, Daithí Dolan, of Sinn Fein, a Dublin City Councillor from 2004 to 2009, recalled:

“Well we dealt with the management, who would have had the hands-on on the development, would have been assistant city manager Seán Carey. I would have dealt with him both at these meetings primarily and also in my role as chair of the planning committee. He would have been the person taking the lead on much of this.”

We were reading chapter 8 of Tom Lyons and Richard Curran’s ‘Fingers’ last night, about the weeks preceding the bank guarantee at the end of September 2008, when his name popped up: 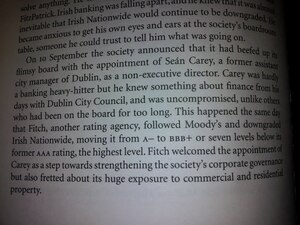 Chartered Land now owns the site and Joe O’Reilly’s loans on the site are understood to be in Nama.

The documentary noted that early last year, Nama paid €250,000 to Chartered Land to help them in their bid to win the consent of the Minister for Arts, Heritage and the Gaeltacht, Jimmy Deenihan, to allow them conduct works on 14-17, Moore St. (Ministerial consent is needed for works to take place on a national monument.) 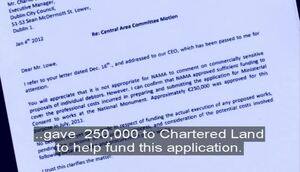 Last Friday, the Department of Arts, Heritage and Culture announced that the public consultation period on an Environmental Impact Statement regarding Chartered Lands’ plans for 14-17, Moore St have been extended until April 24 because the information provided in an original newspaper notice about the EIS submission was inadequate and not compliant with the National Monuments Act, as it did not state “the nature and extent of the proposed demolition”. 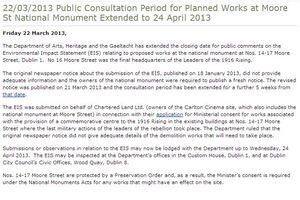 Meanwhile, today’s Irish Examiner reports that a Dublin City Council-ordered review on the planning status of the site has been completed and will be presented to members of the council at a meeting on Monday, April 8. The review was ordered on foot of the TG4 documentary.