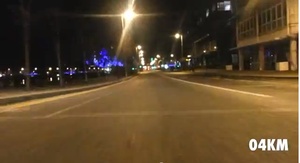 Remember last year you posted a video the day after the Samsung night run showing one of the guys who ran it and blogged via his phone? Here’s something a little different – a run through of the planned 2013 route in under two minutes showing Dublin City Centre in all it’s night-time glory! FYI this was filmed by taping a mobile phone to the front of a bike but the results I think are better than that makes it sound..

Let The Stormy Clouds Chase Everyone From The Place

Day To Night In Kuala Lumpur