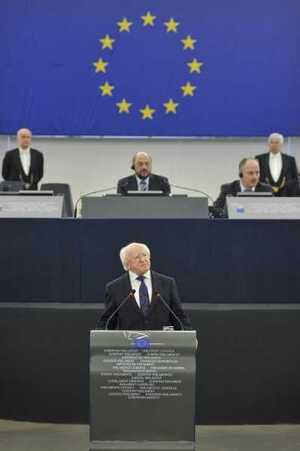 The logistical strand of economics which today holds sway and stands as a hegemonic model of economic theory, not only in Europe, is the flaw of our times. This strand of neoclassical economics is of course useful for limited and defined tasks. It is insufficient however as an approach for our problems and our future. We need new substantive pluralist political economic models and an emancipatory discourse to deliver them, and I suggest that this is possible.

The role of public intellectuals is also an urgent one. They are called upon, I suggest, to state publicly and unequivocally that the problems of Europe are not simply technical, and certainly not solely amenable to solution by technocratic measures at the expense of democratic accountability. The suggestion that citizens and their representatives are not fiscally or economically literate enough to carry the decision making necessary for policies that impinge on their lives – be it unemployment, housing, health, education or the environment – has the most serious implications in legitimacy terms. It is an assumption that challenges democracy itself.

-…If we were, as an alternative, to regard our people merely as dependent variables to the opinions of rating agencies, agencies unaccountable to any demos, and indeed found to be fallible on occasion, then instead of being citizens we would be reduced to the status of mere consumers; pawns in a speculative chess board of fiscal moves in a game derived from assumptions that are weak, untestable or more frequently undeclared.

Full credit (rating) though, in fairness.