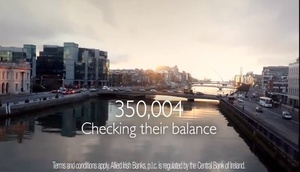 A telly ad applauding the 350,000 people who have downloaded the AIB app.

Made entirely with an iPhone 5!

The ad was shot entirely with an iPhone 5. “It was a big decision to shoot the ads on the iPhone. But once we did some preliminary tests, we knew that they were able to deliver high quality footage,” Damian Hanley, creative director at Irish ad agency Rothco, the creator of the ad.

This TV AD Was Shot On An iPhone (Mashable)

How Much More Of This Can We Take?