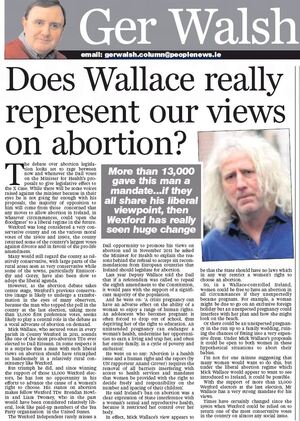 “So, in a Wallace-controlled Ireland, women could be free to have an abortion in all circumstances if they unexpectedly became pregnant. For example, a woman might be due to go on an exclusive foreign holiday but an unexpected pregnancy could interfere with her plan and how she might look on the beach. Or there could be an unexpected pregnancy in the run up to a family wedding, ruining the chances of fitting into a very expensive dress. Under Mick Wallace’s proposals it could be open to both women in these hypothetical situations to abort their babies.

I’m not for one minute suggesting that many women would want to do this, but under the liberal abortion regime which Mick Wallace would appear to want to see introduced to Ireland, it could be possible.”