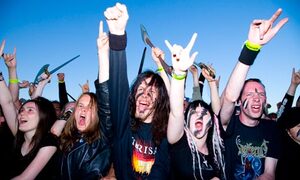 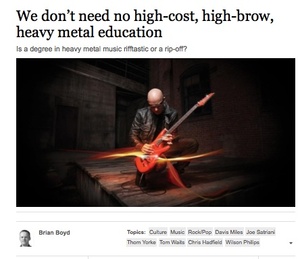 For those who tend to rock

First of all, you can’t put Megadeth up against Miles Davis (that’s like comparing and contrasting Jedward and Tom Waits). And if metal isn’t taken seriously, it’s because half the time it comes across as more choreographed than an all-in wrestling match and makes your average panto look like Ibsen.

There’s more hair and make-up on show at an average metal gig than then at a Girls Aloud performance.

Apart from writing essays and giving presentations about the history of heavy metal (for the love of God!), students who go on to the second year will be shoved out to play some gigs as part of their course requirement. Whereas some students are sent into obscure, draughty rooms and given dead animals or dead bodies to practice on, heavy metal degree students will be giving it the “Hello Cleveland!” in order to earn course credits – an appalling vista.

Salute The Gods Of Irish Metal