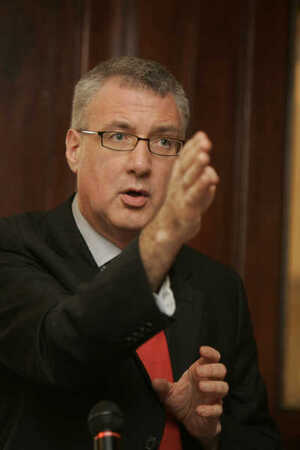 Professor John Crown, consultant oncologist and Seanad member has proposed that all members of the Oireachtas swear an oath of allegiance to the Constitution. His initiative may have been prompted by the proposed abortion legislation. A piece which he wrote in last weekend’s Sunday Independent (now on his blog) has irked some of his opponents.

Not for the first time, an attempt is being made to overthrow and discard our constitutional system of republican government. A cabal of insurrectionists, sympathetic to the agents of a foreign state are, as you read this, plotting and executing a coup d’etat. This is not your standard tanks-on-the-Leinster House lawn-type of coup, but a coup it is nonetheless. It is, in fact, a thoroughly Irish coup.

What this new composite “Tae Party” fringe is proposing is that the Government, in legislating for abortion in the strictly limited case where there is a threat to the life (as distinct to the health) of the mother, should completely ignore both the Supreme Court and the wishes of the ultimate sovereign in a democratic republic – the voice of the people, who not once but twice voted NO! in popular referenda to exclude suicide as a valid threat to life.

The conspiracy goes to the very top of our political structure, with TDs, senators and at least one minister indicating that they might thumb their noses at our Bunreacht and vote against constitutionally mandated legislation. Incredibly, they are being egged on by a former Taoiseach.

The foreign power is, of course, the Vatican, a sovereign state that orchestrated numerous plots to obstruct constitutionally mandated justice for child victims of abuse in multiple countries around the world. The agents of this oligarchic dictatorship are interfering in our democracy as surely as, but thankfully much less effectively than did the Italians and Germans in aiding the overthrow of the Spanish Republic in the 1930s. Thinking people will be particularly offended by the interference of Cardinal Brady, who once swore two small children to secrecy under oath about their testimony to a liturgical inquiry into the abuse they had suffered.

Article 34.4.6 of the Constitution states that “the decision of the Supreme Court shall in all cases be final and definitive”.

I recently proposed in the Seanad that our elected parliamentarians should be asked to swear an oath of allegiance to our republic and to its constitution. This was partly motivated by my irritation that certain TDs and senators who were elected and are paid by, and who represent the citizens of our republic, refuse to acknowledge the very existence of the Republic, preferring to reserve that sacred designation for an imaginary political entity that is about as likely to come into reality as Narnia, Oz or Klingon.

The question has to be asked: “Why shouldn’t our teachtai and senators swear loyalty to our republic and to its constitution?” Those who won’t swear it on the basis of selective conscientious objection should not be allowed to serve in our Oireachtas, any more than a Justice of the Supreme Court or a general in the real Oglaigh na hEireann who refused to be sworn in would be allowed to serve.

It is time to call their bluff, and to tell them that their primary loyalty as parliamentarians is to uphold the Constitution.

@profjohncrown Your article on Sunday was a bitter vitriolic anti-Catholic monologue. It belittled you. It did not belittle Catholics. Shame

@profjohncrown Last time a call was heeded to exclude Catholics from parliament, it took Catholic Emancipation 1829 to restore our rights

Criticism of me from Irish Catholic for being Anti -Catholic irishcatholic.ie/20130117/opini… PS I used to deliver Irish Catholic!!

The Crazy Train Stops For Nobody