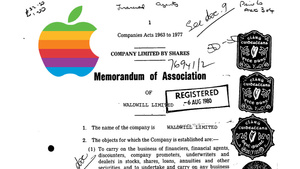 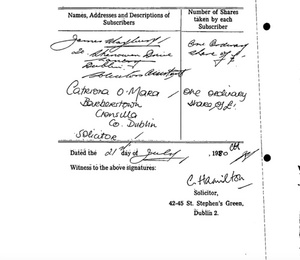 Apple’s Irish company documents from the Summer of 1980.

‘Waldwill Limited’ was ‘set up’ by two Irish residents (above) as the company’s only shareholders.

The company became Apple Operations International (AOI), which retains ownership of Apple’s intellectually properties and is technically the most valuable company in the world

These papers gave Apple an inconspicuous home away from home—only two shares in “Waldwill Limited” were issued.
Thirty years later, Waldwill Ltd. is AOI, with over 700,000 outstanding shares, shareholders that include a shadowy British Virgin Islands firm Apple taps to move money, and executive “directors” who are actually in California

“Byzantine” plots like this are fairly standard for a company of Apple’s size, says an attorney I spoke with who’s familiar with similar tax strategies. “Companies like Apple use code names for acquisition vehicles and then don’t bother to change the name after the acquisition, particularly if the entity is only holding assets, so the stranger the name, the more likely it’s an Apple affiliate.