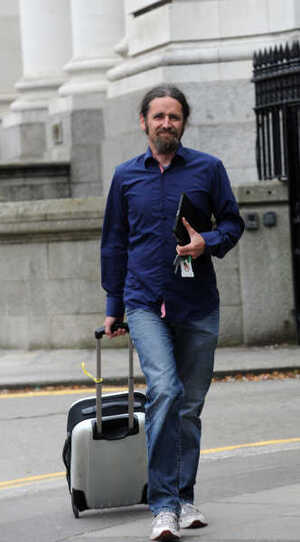 The Indo super sleuth Michael Brennan appears to believe that of the 35 times that the Dáil sat in the first three months of the year I had only attended on 24 of those days.

If he had bothered to do his research then he would have seen that he was in fact very wide of the mark. A half an hours research on the Internet would have shown him this.

The first day that the Independent claims I did not attend the Dàil was Thursday January 17th. That however does not add up given that on that day I voted on the Electoral Amendment Bill.

They claim that I failed to attend the Dáil on Thursday February 7th. This was the time when the government rammed through ‘the deal’ on the promissory notes.

On this particular day, that the independent claims I did not attend, I spoke in the Dáil chamber on the IBRC liquidation Bill. I also voted on 4 separate occasions.

On Friday February 8th when they claimed I was not around for work I attended meetings in my Dáil office followed by a four hour meeting on Garda corruption. The indo claim I did not attend the Dáil on Thursday February 21st when the record quiet clearly states that I voted on the Finance Bill. On the following Thursday the 28th they get it wrong again.

They claim I did not attend but yet again it is clear, for anyone who bothers to check, that on that day I voted on the Electoral Amendment (Dáil constitiencies) Bill. In fact the Dáil record shows that I also put in an application for a topical issues debate on Harristown House on that day.

On the following Wednesday the 6th of March I voted on the HSE Governance Bill yet the indo’s Michael Brennan reports that I was not there.

Two days later on March 8th I am not meant to have turned up either yet I attended meetings in my Dublin Dáil office that day. Less than two weeks later on Thursday March 21st I voted in the Dáil chamber on the Health (Alteration of Criteria for Eligibility) Bill.

But yet again, I’m sure you’ve got it at this stage, it is reported by the indo that I could not be bothered to turn up for work even though the record clearly show otherwise.

I also voted that day on the Disability Services Private Members Bill yet the indo fail to notice this either.

The following Thursday March 28th I questioned Agriculture Minister Simon Coveney on the potential sale of Coillte. For some reason the independent is in denial about this too even though a few minutes searching on Oireachtas.ie would have revealed the truth.

On March 26th I attended meetings in my Dublin Dáil office. Yet again the indo incorrectly suggest I have not done my job.

Of the 35 days that the Dáil sat in the first three months of this year I missed one day and that was Friday January 18th.

On that day I had appointments in my Castlerea office with constituents. So in total I missed one single day in The Dáil in the first three months of the year and not 11 as reported by the Indo.

This amounts to an attendance rate of 97.1% which is one of the highest of any TDs in the country. What is amazing is that the Independent’s journalist could not have established this themselves.

When carrying out this exercise I decided to see could a ten year old neighbour find out what the country’s biggest news group could not.

I gave them the list of 11 dates on which the indo claimed I had failed to turn up for work. I also suggested they try Kldarestreet.com.

Within 10 minutes they were able to conclusively contradict one of the dates. How come the country’s biggest media empire could not?