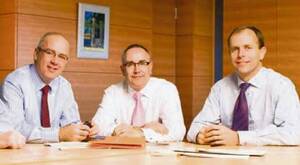 (From left: Anglo’s David Drumm and Peter Fitzgerald in 2007)

Further to the Anglo tapes controversy.

Mr [John] Bowe [Anglo senior manager] has told RTÉ he categorically denied the allegation that he was, directly or indirectly, a participant in misleading the Central Bank of Ireland in September 2008.

He said the talks with the Central Bank focused on obtaining funding for Anglo to allow it continue on an interim basis pending a more stable market, when the bank would be able to re-establish other funding sources and repay the emergency finance.
…Mr Bowe also pointed out that the phone call was three days after Lehman Brothers filed for bankruptcy, and therefore took place during a “period of severe and unprecedented market dislocation”.
In a statement to RTÉ, Mr [Peter] FitzGerald [Anglo senior manager] said he was not a member of the bank’s executive management board in 2008 and was not involved in discussions regarding Anglo’s funding position with the Central Bank.

He also stated he was never aware of any strategy to mislead the authorities in relation the Anglo’s funding position.

Debt In The Afternoon