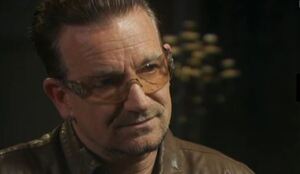 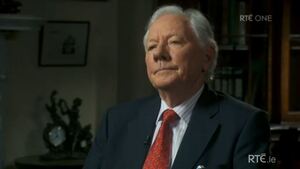 On RTÉ’s The Meaning of Life With Gay Byrne last night, Bono spoke to host Gay Byrne about God and his tax arrangements

Essentially, U2 is a business and he’s a tough guy.

And, you know, GET OVER IT.

Gay Byrne: “If I don’t ask you this, I’ll be criticised and if I do ask you this I’ll be criticised but since you’ve touched on the subject now. The subject of U2’s taxation arrangements, whereby people are expressing their wonder at what they call your hypocrisy, not my word, their word, hypocrisy of haranguing us all and asking us to pay for more international aid, at the same time as you shift your company overseas in order to save taxation.”

Bono: “Yeah, but it’s [unintelligible] of Irish people to be critical of this is because the shock horror moment here is U2 behaving like a business. (Fake shock facial and gasp expression). And I mean our, we live in a small rock in the North Atlantic and we would be under water were it not for very clever people working in Government and in the Revenue who made tax competitiveness a central part of Irish economic life.

It is the reason we have companies like, you know, Google and Facebook and, indeed, I helped bring those companies to Ireland. So it’s more than churlish for Irish people to say well we don’t want an Irish company involved in that stuff that we do want everyone else. I mean we do pay a lot of, I want to say, we pay a lot of tax and…but we are, you know, tax sensible. But, as every business is. And why is it because I’m involved in these…some people think as idealistic things but I think as pragmatic things, why can’t U2 be tough in business? This thing of the warm, fuzzy feeling, you know we want you know this…I’d like people to get over that. Because that’s not who I am. I am tough and I may have, you know, I may sing from a very private and intimate place and I make art. But I’m tough-minded and I’m intellectually rigorous, I hope. And, I think U2’s tax business is our own business and I think it’s not just to the letter of the law, it is to the spirit of the law.”

Byrne: “In that context do you think you’re removed from the everyday lives of people in Ireland, especially today?”

There He Is Now