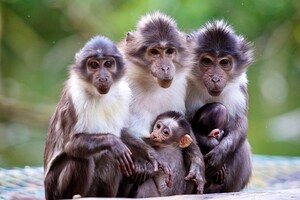 Mothers Monifa and Malull with ‘dominant male Danzo and their new babies Awiane and Jomoro.

At the African Plains enclosure.

We are celebrating the birth of two White crowned mangabeys. The half brother and sister, sired by the dominant male Danzo, were born just two weeks apart to mothers Monifa and Malull.

On the 5th April, Malull gave birth to a male who the keepers named Jomoro, after the western region of Ghana, home to a majority of the world’s population of this rare species. Ten days later Monifa gave birth to a young female who the keepers named Awiane, the capital of the Jomoro district.White crowned mangabeys are endangered in the wild and their numbers are rapidly declining. Dublin Zoo is one of twelve zoos in Europe participating in a breeding programme and has a very successful breeding record. 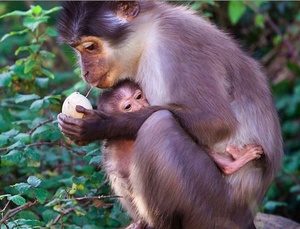