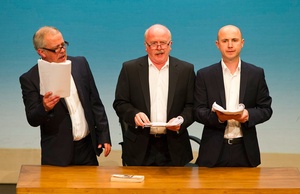 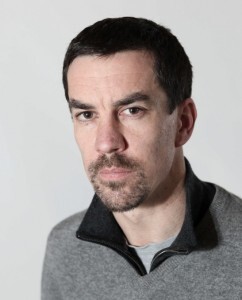 (The moolah men, top from left: Darragh Kelly, Mark Lambert and Peter Daly in Guaranteed! and, above, playwright Colin Murphy))

Now this is good timing.

Colin Murphy’s play Guaranteed! by (Fishamble Theatre Company) about the night of the bank deal, looked like it might become a modest, critically acclalmed success.

That was last Friday.

Then the Anglo Tapes EXPLODED.

I’d like to claim that I came up with the Anglo tapes as a publicity ruse; in any case, we couldn’t have planned a more effective one, and Guaranteed! is selling out.

The play tells the true story of the bank guarantee and how we got there, in a way that is (hopefully) entertaining and dramatic. No facts in it are invented, but I had to imagine the behind-closed-doors dialogue – based on descriptions I was given.

In an earlier draft, I had a scene where a foul-mouthed Anglo executive phoned somebody who had been talking Anglo down, and let rip. It was very funny. It was one of my favourites. It was based on descriptions I’d been given of the laddish, aggressive culture in Anglo, and on the fact that they did phone their critics to complain, robustly – but it was, essentially, a fiction.

When I looked at it coldly, I realised I couldn’t stand over it. It was too far a foray into fiction – it was entertainment without any actual documentary evidence to back it up. So I cut the scene.

What my play tries to do – and what an inquiry will hopefully pursue – is understand how and why all of the institutions that were supposed to protect us against the excesses of outliers like Anglo failed so utterly.

Laughing at the Anglo boys is good fun, and anger at them is well deserved, and possibly a useful political force in itself – it may force an inquiry, for example. But what we need is to learn where we went wrong, so we don’t repeat it.

An inquiry may help that – as long as it’s effectively bipartisan. In the meantime, Guaranteed! is a modest contribution. It’s not the full story but, maybe, it helps us on our way.

Guaranteed! is in Bray tonight at the Mermaid Arts Centre; Waterford at Garter Lane on Saturday and the Civic Theatre in Tallaght on Monday and Tuesday.