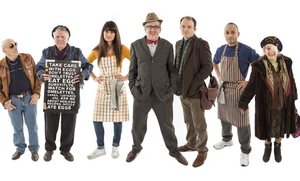 3. Count Arthur Strong is a character created by Steve Delaney; he’s already been an Edinburgh Fringe fave and a brilliant radio show. Linehan co-wrote the series with Delaney, and directed it, too.

4. His lone feature credit to date? A co-writing credit on justly forgotten 1997 rom-com The Matchmaker.

4. He’s just wrapped an IT Crowd special, due later this year. He’s been teasing it on Vine