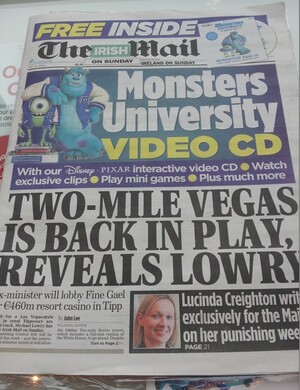 The Irish Mail On Sunday reported yesterday how Tipperary Independent TD Michael Lowry is confident the new Gambling Control Bill will allow for his and Richard Quirke’s plans for a multi-million euro casino near Two-Mile Borris in Tipperary to go ahead.

“Minister for Justice Alan Shatter has said the proposed casino at Two-Mile Borris in Co Tipperary cannot go ahead under the terms of the new gambling control bill published today.”

“The bill will limit the number of casinos in the country to a maximum of 40 and no individual casino will be permitted to have more than 15 tables.”

“It also provides for new licensing and regulatory framework for gambling, which extends the licensing regime to include online and electronic gambling.”

“Mr Shatter said the Cabinet was not in favour of so-called super casinos which he said tend to attract the wrong type.”