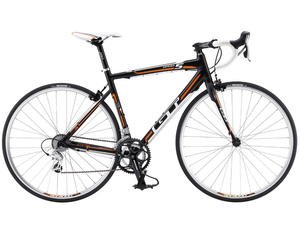 My bike (above) was robbed this morning between 10.20am and 10.45am outside the Westin Hotel on Westmoreland Street [Dublin]. An eyewitness saw a guy with an angle grinder cut through the kryptonite lock. A bystander approached and was threatened to back off…. I reported it at Pearse St Garda Station but the feedback was that “5 bikes have been stolen in the last half-hour”.

It also seems that a person fitting the description supplied was spotted stealing bikes in various parts of the city including Castle Street. The guards suggested that I reach out to my insurance company.

Depressing as I don’t have insurance given that I bought the bike at Cyclebike 2 weeks ago…The bike is a GT Series Road bike – as per the pic (above) but the saddle and grips are actually black. It’s pretty distinctive so on the off chance than anyone has seen the bike please contact below.