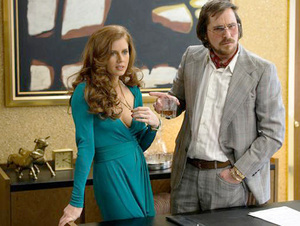 1. Those crazy kids who brought you Silver Linings Playbook (2012) are BACK! And they’ve brought Batman, Hawkeye and Lois Lane with them!

2. American Hustle is directed by David O’Russell, and stars Christian Bale, Bradley Cooper, Amy Adams, Jennifer Lawrence and Jeremy Renner – Bobby De Niro and Louis CK are in it too.

3. Re: Good Times Bad Times on the soundtrack – you gotta get special permission to use a Led Zeppelin track in your movie – ask Jack Black.

4. Make no mistake, this movie is ALL about the hair. Bale aside, Cooper’s ‘jew-fro’ is channeling Sean Penn in Carlito’s Way (1993).

5. Yes, it’s based on a true story. The movie was originally titled American Bullshit. Fact.