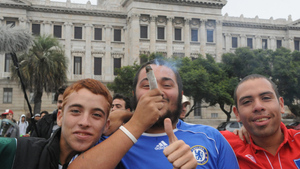 A game changer in the ‘war’ on drugs.

Under the legislation, Uruguay’s government would license growers, sellers and consumers, and update a confidential registry to keep people from buying more than 40 grams a month.

Carrying, growing or selling pot without a licence could bring prison terms, but licensed consumers could grow up to six plants at a time at home.

Growing clubs with up to 45 members each would be encouraged, fostering enough marijuana production to drive out unlicensed dealers and draw a line between pot smokers and users of harder drugs.

The latest proposal “has some adjustments, aimed at strengthening the educational issue and prohibiting driving under the effects of cannabis”, ruling coalition deputy Sebastian Sabini said. “There will be self-growing clubs, and it will also be possible to buy marijuana in pharmacies” that is mass-produced by private companies.

An Institute for Regulation and Control of Cannabis would be created, with the power to grant licences for all aspects of a legal industry to produce marijuana for recreational, medicinal or industrial use.