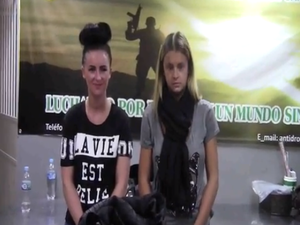 Michaella McCollum Connolly, from Dungannon (left) and her friend Melissa Reid being questioned by a customs official in Lima airport, Peru, after the pair were detained as they were about to board a flight to Madrid, Spain.

The National Police of Peru said they found more than 24lb of cocaine hidden in food in the luggage of the two women.