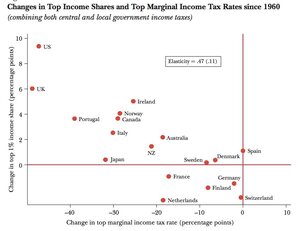 A graph mapping the income gains of the top 1 percent in several countries, including Ireland, against the tax breaks most of them have gotten since 1960.

This is consistent with other studies that have shown the tax code has a big effect on income distribution.

The U.S. Has The Worst Income Inequality In The Developed World, Thanks To Wall Street: Study (Huffington Post)