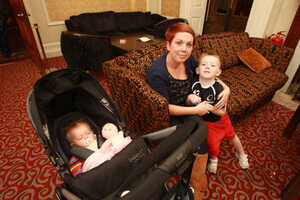 I have emailed you on many occasions, regarding my situation in Priory hall. You have replied once.

On July 15th mine and my children’s lives changed forever, my beautiful, kind, caring Partner and father to my children took his own life. His name is Fiachra Daly. We miss him terribly.

Fiachra was the happiest man on earth, he lived for myself, Oisin (7) and Cerys (2), he never suffered from any form of mental illness or depression, we had been together for 17 years and I never once witnessed any signs.

That is up until the week prior to his death, when we received demands from banks, looking for payment of arrears on a property that we can’t live in, asking us to fill out, yet again, forms to request an extension of our moratorium, all for a property we can’t live in through no fault of our own. The stress, the worry of not being able to provide a safe home for us, his young children, eventually took its toll, as it has on every resident.

He was obviously a silent sufferer, he never complained, he supported me, when I was feeling low, he hated the idea that he couldn’t provide a safe home for us, that I do know, but I thought we’d battle through this together. How wrong was I?

I now have no home, my children have no permanent home, but most importantly, I have no partner and my children have lost their wonderful dad. Our future, security and certainty changed the minute we were evacuated and not one thing has changed in two years, every email, phone call, letter seems to have fallen on deaf ears.

So I ask you, what will it take now for someone to listen and act on something that should’ve been dealt with two years ago and saved a lot of tax payers money and most of all saved a life?

Tom McFeely  {Priory Hall developer] walks around scot free, he’ll never suffer how we are suffering, he’ll never lose what I’ve lost. He’ll start again, I am left with a lifetime of heartache and my children will inherit that too.

Is there any justice in this country?

I’ve lost Fiachra, but I’ve not lost my voice.