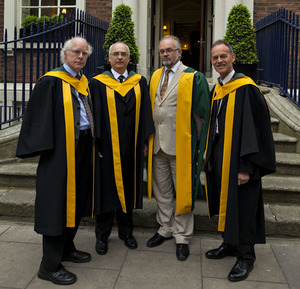 Head of the Political Science department at Trinity College Dublin, Dr Michael Gallagher, above far left, has written a measured piece on the upcoming Seanad Referendum.

“Opinion polls suggest that while in a straight choice between the status quo and abolition the latter would prevail, the idea of retain-and-reform is growing in appeal. Indeed, advocates of a No vote are at pains to emphasise that they do not want to preserve the Seanad as it is – a No vote, say Democracy Matters, ‘is the first step to a new Seanad’.

“The reformed Seanad, as outlined by Democracy Matters, would be a directly elected body: elected not just by the current Dáil electorate but also by those in Northern Ireland who are eligible for Irish citizenship, by all Irish passport holders abroad, and by graduates of all third-level institutions (it’s unclear whether this would include non-Irish citizens, given that Irish citizens would already have a vote under one of the other headings).”

“What powers should this reformed Seanad have? The Quinn–Zappone draft bill is relatively modest in its proposals, suggesting roles such as scrutinising draft EU regulations and directives as well as statutory instruments, as well as ‘the power to inquire into the need for new legislation in certain areas’. Whether voters would bother turning out in significant numbers to choose the candidates whom they regard as best equipped to scrutinise draft EU regulations is doubtful, though. Far more likely that those elected would be aspiring TDs and ministers who would, as Senators, do whatever they thought most likely to secure their election to the Dáil, and that might not involve spending much time on scrutiny of draft EU legislation.”

“Others go further and would like to see the Seanad given more or less the same powers as the Dáil. Vincent Browne (Irish Times, 17 July 2013) argues that the lack of accountability in the current system could be addressed by ‘giving the Seanad the same powers as the Dáil, except the power to elect and unelect a government’. And Democracy Matters, on the front page of its web site (3 September 2013), seems to see the reformed Seanad as being more powerful than the Dáil – indeed, the body to which the Dáil should in some way be answerable – stating that ‘A new and effective Seanad is critical to make the Dáil accountable to a body other than themselves’. It would also have significant legislative powers: ‘A reformed Seanad means new expertise and new legislation to underpin Ireland’s economic recovery’. The range of views on the composition and powers of any ‘reformed Seanad’ suggests that if the electorate votes No on 4 October, it would not be easy to reach swift agreement on what such a body should look like, and that in practice the current Seanad would be with us for some time.”

“Part of the motivation underpinning the idea of a directly-elected Seanad with pretty much all the powers of the Dáil no doubt comes from despair at the deficiencies in the Dáil’s ability to compel accountability from the government.

“Even so, the idea of a strong Seanad, elected at a different time and by a different electorate than the Dáil, is unlikely to be a remedy for anything except gridlock. When the two houses disagree, whose will should prevail – that of the Dáil, or of the reformed Seanad? Looking around Europe the only examples of genuinely strong second chambers are to be found in Belgium (a manifestation of federalism), Romania (close to a presidential system), and Italy. The power of the Italian Senate is one of the main reasons why left-wing governments rarely last their full term and why the Italian system of governance is regarded as one of the least effective in Europe. If the only measures that can get through parliament are ones that can command majority support from two different houses, elected at different times by different electorates, which appears to be the Democracy Matters preferred option, then only lowest common denominator measures have much chance of making it through.”

“The desire for a strong Seanad is an understandable, though surely mistaken, response to the reluctance of the government to move as far and as fast as it could in giving a more meaningful role to the Dáil – a role that, while not enabling the opposition of the day to thwart the elected government, would compel a higher degree of accountability and would enable meaningful input from government backbenchers and opposition TDs.”