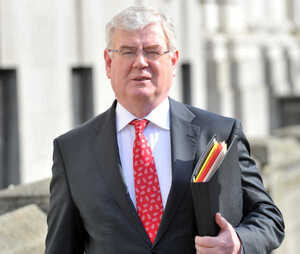 Tanaiste Eamon Gilmore appeared on RTE R1’s Today with Sean O’Rourke to defend the Labour party’s record in coalition and his own as leader.

Sean O’Rourke: “The pattern is this, Tanaiste, if you go back to say, 1992, Labour campaigned on the basis of keeping Fianna Fail out. What do you do afterwards for reasons that are perfectly understandable, arguably, you put Fianna Fail back in. You weren’t in the labour party at the time, but again there was an expectation raised and the opposite was done. An expectation was raised at the last election about things like Child Benefit about things like Water Taxes, about things like that going up, or not going up and Third Level Fees not going up and so forth, and the opposite was done. And you’re paying the same price now, and you, personally are paying the same price as Dick Spring paid in the early 1990s?”

Eamon Gilmore: “Well, first of all I think that Government at the present time is in entirely different circumstances. There are people who now have the right to vote who weren’t even born then.”

Gilmore: “Let’s look at what we committed to do, let’s look at where we started out from when this Government was formed. This country was in the biggest… (economic down-turn)”

Gilmore: “Yes, but it’s not just a case of me making a point…”

O’Rourke: “Actually, is it not the case when you went in and got the brief, it turned out to be far worse than you actually had thought was the case beforehand? I mean the IMF was in town, the Troika was here. I mean, what more did you need to know?”

O’Rourke: “And all your represented promises went awry?”

Gilmore: “Actually no, all our promises didn’t go, that’s one of those great generalisations. You know very well Sean, that the Labour Party, if you take it, right across the commitments that we made, whether it was.. – let’s take for example the commitment to put emphasis on employment, that was one of the promises that we made – we’re delivering on that. Let’s take the commitment that we would have reform on our Public Services and introduce constitutional convention, some of the Social Leglislation and so on – we have delivered on that.
Let’s take the promise that we would reform our Education system, Ruairi Quinn is delivering on that. Let’s take the promise that we would restore the National Minimum Wage – we have delivered on that. Let’s take the promise that we would protect the interest of working people, we have rstored the joint labour committees, we have ensured that there haven’t been any increases on taxes on people. Let’s look at the promise in relation to the way in which Public Service pay would be dealt with and you can take The Haddington Road Agreement – to ensure that people earning less than 65,000 Euros a year weren’t going to have their pay cut.
So, you know, when we talk about promises, let’s do it on-balance. Let me finish on this, I acknowledge… I acknowledge very clearly that yes there were promises of commitment that we made that have not been delivered, and we weren’t able to… (because we’re in a coalition).”

O’Rourke: “The Labour Party Conference is coming up in the Autumn, will you apologise there, for that failure?”