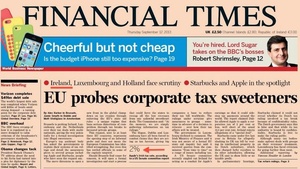 Should the Commission find cause for concern, it will open a formal investigation and start a process that could force the states to recoup all the lost revenues from any unlawful sweetheart deals.

A U.S. Senate committee recently singled out Ireland for acting as a conduit for Apple’s earnings so it could sidestep large tax payments around the world. The report claimed Dublin allowed Apple to apply a corporation tax of 2 percent or less, well short of the usual 12.5 percent rate.

Anything Good In The FT?