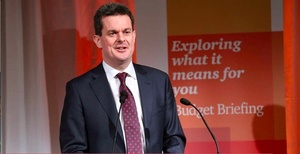 Feargal O’Rourke (top), a partner with Price Waterhouse Cooper appeared with Richard Murphy (above) a tax justice activist on Today with Sean O’Rourke  on RTE R1 this morning to defend Ireland’s tax status.

Sean O’Rourke: “Joining me on the line now are Richard Murphy, Head of Tax UK, and Feargal O’Rourke, Head of Tax at Price Waterhouse Cooper in Ireland. Good morning to you both. Richard Murphy, to you first – Richard, you’ve been long critical of The Irish Government’s approach to its tax arrangements with multi-nationals, so what’s your response into this investigation, not just in Ireland, but also in The Netherlands and Luxembourg?”

Richard Murphy: “Well, I’ve done a little sounding out this morning and as what was said on the News, the EU has yet to confirm exactly what they’re planning to do on this. But the message seems to be fairly clear – this is not a investigation into the 12.5% tax rate, let’s get that one on the table for now. But, let’s also be clear what they’re worried about which is – it doesn’t matter what your tax rate is, if there are no reported profits in your country, even though the accounts of the company trading there appear to show that there’s a highly profitable activity. So what the question is – what are the deals that go behind the whole tax arrangements that some companies are entering into? It looks very much like an investigation, by the way, into the very high profile cases. We’ve got Apple in Ireland, we’ve got Google in Ireland, but we’ve got Starbucks in The Netherlands, we’ve got Amazon in Luxembourg and those are the three countries that are being named to be subject to the investigation.
I welcome this move, I think it’s absolutely appropriate – it is looking at the deals, the advanced pricing deals, some of them are now called, though way back in the 1980s, and I knew Ireland well in the 1980s, there were other deals that could be done with the Irish Revenue Authorities, in its former Latin, but I was still party to them – these should be consigned to history. Tax should be open, transparent and accountable, the problem has been that it hasn’t been – and Ireland has helped undermine the tax revenue of other countries and the EU has had enough of that.”

O’Rourke: “On that point Richard, The Government and The Department of Finance has issued a statement saying that; actually Ireland does operate an open, transparent and statute based taxation system.”

Murphy: “Yes – it is statute based, of course it is, all tax is statute based at the end of the day. Ireland does not operate a tax system in the same way as some other countries do. So, for example, the questioning by Ireland of what is called ‘transfer pricing’, that’s he pricing that takes place between Irish companies and other parts of the same group elsewhere in the World seem to be much more lax than elsewhere in the World. Ireland has the arrangement where an Irish company is not necessarily taxed in Ireland – which is now extremely unusual – which is part of what is called the ‘Double Irish’, which was made well known by Google and helped it send $10 billion worth of royalties to Bermuda in little over a year. These arrangements which Ireland clearly allows are what are irritating governments across Europe and across the World.”

O’Rourke: “Well, if they are and before I bring in Feargal O’Rourke, it’s equally the case, for instance, the celebrated, if I can use that word, case of Starbucks at the House of Commons Committee, they’re paying no big amount of tax in the UK, so I mean, it seems not just to be these three countries, but some of the bigger countries as well?”

O’Rourke: “Feargal O’Rourke, is there anything the Irish Government has to fear about this inquiry or whatever word one wants to use, investigation, inquiry, sounding-out, checking-out?”

Feargal O’Rourke: “In my view, none at all, Sean – and in fact Richard makes references to the 1980s, well, you know, the World has moved on, and Ireland, quite a lot since then. In my view, Ireland has nothing at all to fear, and it’s not even an investigation They’ve asked three countries to provide details about their tax system – which is quite normal really. The EU does this quite a bit, to see whether they need to look any further. In many cases, when they get information they don’t look any further. But I actually welcome this, in part, because I think there’s a lot of guff talked out there about Ireland being a tax haven.
Well, the acid-test as to whether a country is a tax haven or not is, you can forget about the definitions you say – do other countries want to do business with you, do they have double-taxation treaties, Ireland assigned sixty eight – a genuine tax haven with sandy beaches and sunshine have none, or very few. We’re not a tax haven and I think when the EU come to look at our tax system – and don’t forget, we’ve inherited a tax system from the British in 1922.”

Murphy: “Come on, come on. Look, first of all I’m sorry to say Feargal that’s a bit of an insult to the listeners this morning to portray tax havens as places that have sandy beaches and palm-lined shores.

Feargal O’Rourke: “It’s countries who will do business with you or not!”

Murphy: “It’s absolute nonsense, everyone wants to do business with a tax haven –Cayman is the biggest tax haven in the World, your firm is there – of course. People do business with tax havens because of the advantage they offer. This is at the core of this, can the EU do anything, and there you’ve misled again Feargal, of course the EU can because this is about Competition Law and if the Irish Government is giving ‘State A’ to companies who are using Ireland, which is creating unfair competition between member states in the EU, it can be marred that those forms of ‘State A’ are effectively tax subsidies given by the State of Ireland because of giving agreements in advance to specific pricing arrangements – those can be withdrawn, they can be marred at the Irish repayment, the legal precedence is clear, the penalty is certain, this is where the EU is clearly…”

Feargal O’Rourke: “I can say Richard, with certainty, you are stuck in the 1980s, when it comes to Ireland because I think you will find, and I hope Richard that you get due prominance when the results do come out – Ireland will be found not to have provided state-aid to companies.
We inherited this system from Britain in the 1920s which said basically, if a company has its heart and mind here, its residence, we’ll tax it on its world-wide profits, and if it doesn’t we only tax it on activities it carried out here. Transfer pricing has been introduced to OECD standards and again if you were to engage with the revenue authorities, The Department of Finance here, you will find that transfer pricing reviews are now taking place on a day to day basis by the revenue commisioners. We do operate, and I believe that this examination is not… Ireland will be found to have not done any tax, no matter what way you define them and did not provide any state aid. And I’d be quite happy to go with that prediction right now.”

Murphy: “Well, I have to disagree with you, first of all, the 1920s is even further ago than the 1980s you tell me I should forget. We’ve moved on from the 1920s for a very good reason, because the laws that existed then are abusive and you’ve still got them.”

Earlier: Anything Good In The FT?