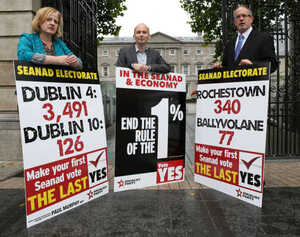 From left: Ruth Coppinger, Paul Murphy MEP and Mick Barry at the launch of the Socialist Party’s campaign to abolish the Seanad at Leinster House this morning.

“It is the purpose of the Seanad from its inception – a more limited franchise is designed to ensure a Seanad that is more conservative than the Dail. None of the proposals for a reformed Seanad change that reality.
Hypocrisy abounds on all sides on this issue. On the No side, Fianna Fail’s bleating about a reformed Seanad is just as hypocritical as the government’s talk about democratic change. The collection of right-wing politicians and journalists that makes up the so-called ‘civil society’ group, Democracy Matters, is just as guilty. If Fianna Fail was serious about reform of the Seanad, it could have driven it during its dominance of politics over the past decades.”