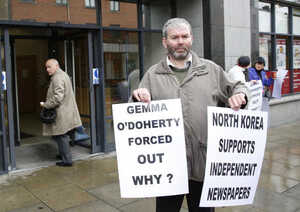 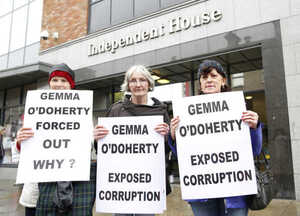 Former Garda John Wilson, top, and Eileen O’Brien, Lucia O’Farrell and Catherine Costelloe, above, held a protest over the dismissal of journalist Gemma O’Doherty outside the offices of Independent News and Media on Talbot Street, Dublin earlier today.

John Wilson is one of the Garda whistleblowers who exposed the quashing of penalty points.

He originally made a complaint about the quashing of points through the Garda Confidential Recipient in March 2012, which was sent on to the Garda Commissioner Martin Callinan.

He says after several months passed, and after he received no response from the Commissioner, he contacted United Left Alliance TD Clare Daly. Ms Daly, along with several other TDs, went on to name people who had penalty points quashed in the Dáil, last December.

Lucia O’Farrell, from Carrickmacross, Co. Monaghan, lost her 23-year-old son Shane in a hit-and-run on August 2, 2011. The man who struck Shane, Zigimantas Gridzuiska, 39,  had 42 previous convictions in three different jurisdictions, was found not guilty of dangerous driving causing death. Judge Pat McCartan had directed a jury to find him not guilty in Dublin Circuit Criminal Court. Judge McCartan ordered him to leave the country.

Catherine Costelloe, from Limerick, used to work with the London Metropolitan Police and when she returned to Limerick she became involved in helping families of missing people. Today she spends much of her time trying to find out the truth behind the cases and to find their bodies with Search For The Missing.

Please help us find out what happened to our missing sons (Gemma O’Doherty, Irish Independent)