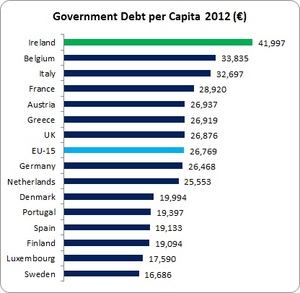 Highest debt per capita of any European country.

…Ireland is at the top, head and shoulders above all other countries – in particular, Italy, Greece and Portugal which the Fiscal Council refers to as countries with a higher debt when measured as a percentage of GDP.  Why the difference?
Measurements which use GDP as the benchmark can distort Irish data given that GDP is flattered by the accounting practices of multi-nationals.  For instance, when using Gross National Income as the benchmark (which is equivalent to GNP) which removes international flow such as profit repatriation, debt in Ireland is 143 percent of GNI.  This is the second highest, only exceeded by Greece.  But the fun doesn’t stop there.  The ESRI has found that even our GNP/GNI is inflated due to multi-national activities (undistributed profits of headquartering multi-nationals).  If this was factored out, we’d be reaching Greek levels of debt….

Sea of Debt (Michael Taft, Unite’s Notes On The Front)