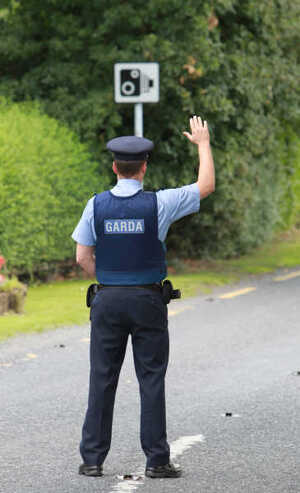 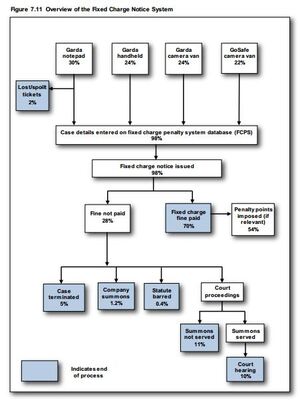 Yesterday the Office of the Comptroller and Auditor General released its Report on the Accounts of the Public Services 2012.

Chapter seven of the report deals with the Management of the Fixed Charge Notice System in 2011 and 2012, above.

The C&AG became interested in this area after a garda, unnamed in the report, contacted the C&AG seeking a meeting to discuss their concerns about the operation of the fixed charge notice system.

The garda, who gave the C&AG the file, alleged that, in many cases, the notices were cancelled corruptly and illegally.

The garda also alleged a number of people who benefited from (one or more) cancellations of notices went on to commit further offences.

Some of these offences, it was alleged, resulted in deaths and/or injury to themselves and/or third parties.

A similar file was supplied to the C&AG by the CEO of the Road Safety Authority in late August 2012.

So what did the C&AG find?

The following graphs show the variation in speeding offences recorded and fixed charge notices issued between 2011 and 2012: 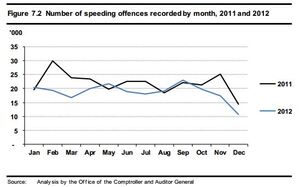 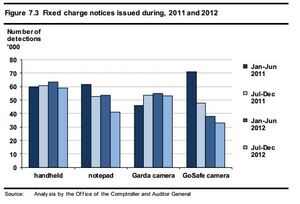 That 21.8% of fixed charge notice cases recording in 2011 and 2012 were sent for prosecution in court, resulting in the issue of summonses, a service carried out by the Gardaí.

However, it also states that  half of the 2011 cases that proceeded to the summons stage were struck out in court because the related summonses were not served. The report found that this suggests “around 11% of all recorded fixed charge notice cases end up unpaid and without being answered in court”.

The C&AG report identified that, in May 2013, 486 gardaí – 41 Chief Superintendents, 151 Superintendents and 294 Inspectors – had the facility  to terminate notices.

It also discovered that there are no controls in the system to restrict Garda members who have the facility to terminate cases from doing so in relation to cases not within their authority.

Of the 42,700 fixed charge notices cancelled during 2011 and 2012, the C&AG found just over half were terminated centrally in the Fixed Charge Processing Office in Thurles or as part of the Juvenile Diversion Programme.

The remainder were terminated in Garda districts, of which there were 110 in 2011 and 2012. Consequently, the average termination rate of notices among districts was 2.2%.

Ennis, Roscommon and Sligo had the highest rate of terminations: 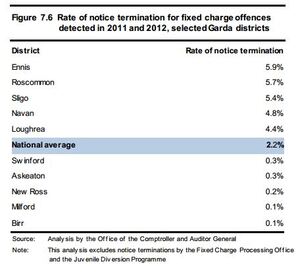 In relation to notices charged outside the district where the offence took place, the Blanchardstown and Bridewell districts in Dublin had the highest rate of terminations related to offences outside their district: 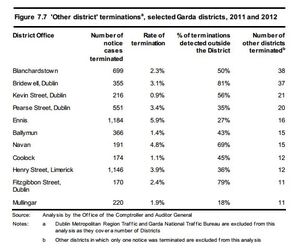 The C&AG looked at a sample of 25 ‘out of district’ termination cases and found at least a third of them appeared to have been unauthorised within the terms of the Garda manual guidelines.

As for multiple termination for certain vehicles, the C&AG found 2,900 cases were terminated in relation to around 700 vehicles, with three or more cases terminated each. 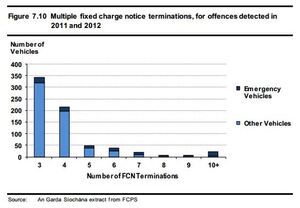 In relation to company cars, the C&AG noted penalty points cannot be attached to a company ‘since it cannot hold a driving licence’. In light of that, it found there were notices issued to companies for 20,844 road traffic offences during 2011 and 2012.

Those ‘not pursued’ were given ‘company summons’ status on the system – almost all of which relate to speed camera detections.

One company had 203 cases going to ‘company summons’ status.

The C&AG found over 3,000 offences detected in 2011 and 2012 became statute barred by March 2013 – around 0.4% of all offences. It found late entry of data into the Fixed Charge Processing System was a factor in this, especially where offences are recorded on handheld devices or notepads.

So You Know Those Penalty Points?