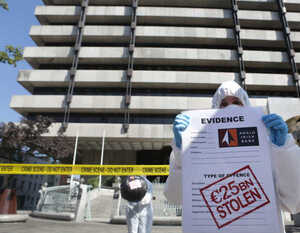 (The launch of the Campaign to Freeze Anglo Assets in July outside the Central bank, Dame Street, Dublin)

They ripped off everyone.

A US court has been told that the former Anglo Irish Bank overcharged clients by more than half a billion euro.
The allegation was made by Eddie Fitzpatrick, who runs a forensic banking firm called Bankcheck.
Mr Fitzpatick’s claim is part of litigation being taken by Irish developer John Flynn, who is making allegations of fraud against IBRC; formerly Anglo Irish Bank.
Mr Flynn is objecting to the liquidation of IBRC because it could block him being paid damages if he won his fraud case.
In new documents lodged in US Bankruptcy Court in Delaware, Mr Fitzpatrick said he had audited 31 separate customer accounts.
He found the clients had been overcharged as a result of “loading” of interest rates…

As John Grisham fans will know.