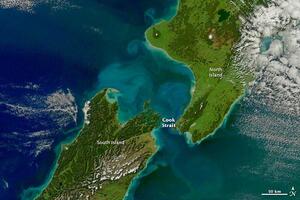 The two main islands have been called the North Island and the South Island. They have also appeared that way on maps and charts. But in recent years, officials discovered an oversight: the islands had never been formally assigned the monikers.

…the Maori names for the islands had been the same since Europeans first arrived, but the English names had changed over time. On some early maps, he said, the islands were called New Ulster and New Munster, after the Irish provinces. The South Island was also sometimes called the Middle Island, a reference to the much smaller Stewart Island, which is even further south.