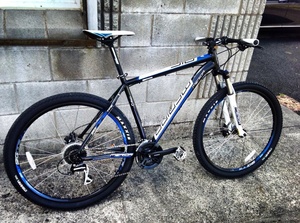 My bike – a Merida Big Nine TFS100 – was stolen from Blackrock [Co Dublin]  DART station over the weekend. They used acid to break through the locks.

I recently returned from an overseas leprosy-aid trip to Africa with my charity TASC, where we cycled 750km between different leprosy outcast villages and homes for the dying. This bike brought me safely across and through tough terrain and times, and so is hugely sentimental. It was gifted to me for the leprosy aid trip by Flanagan’s Cycles in Sligo. Desperately want it back, reward for its safe return. Thanks.

Watch Shane and pals on their cycle for TASC Madagascar

Last Seen On The Ormeow Road