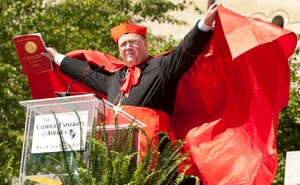 Cardinal Timothy Dolan, above, archbishop of New York was the man sent to Ireland in March 2010 by Pope Benedict to lead the Apostolic Visitation to Ireland and examine the country’s four archdioceses in the wake of the sex abuse scandals.

In May of last year the New York Times reported that Dolan authorised payments of as much as $20,000 to sexually abusive priests – when was the archbishop of Milwaukee – as an incentive for them to agree to be dismissed from the priesthood.

The documentary Mea Maxima Culpa: Silence In The House of Good documented the  the crimes of one of those men,  Fr Lawrence Murphy, who abused hundreds of deaf children.

Today, the Survivors Network Of Those Abused By Priests reports:

Late yesterday, Judge Rudolph Randa ruled that a deaf survivor of  Fr. Lawrence Murphy is bound by an agreement he reached with church officials even though he was deceived in order to secure that agreement.The agreement was reached in an archdiocesan program designed by Dolan in 2003. We believe the purpose of that program was to quickly and quietly settle with victims while deliberately misleading them about the archdiocese’s prior knowledge of the criminal history of abusers. At the same time, it induced victims to accept nominal restitution in exchange for waving all future legal rights. If the victim would later discover they had been deceived by Dolan and the archdiocese, as we now know they were, they would have no legal recourse.”

“For instance, long-secret church documents – released by court order – show that Dolan and the archdiocese misled victims and the public about when and how much church officials knew of Murphy’s history of assaulting deaf children.”
“Dozens of the 570 victims who filed cases in the bankruptcy entered into fraudulently induced agreements with the archdiocese, with the direction and approval of Dolan.”
“blockquote>In an earlier decision similarly shielding the court from investigating Dolan’s possible fraudulent conduct, Randa supported Dolan’s transfer of $57 million of archdiocesan funds into a “cemetery trust”, thus eliminating it as an asset prior to the bankruptcy filing

.  Overturning a decision issued earlier by bankruptcy Judge Susan V. Kelley, Randa said Dolan’s transfer could not be examined or investigated by the court because, even if fraudulent under US law, if the archdiocese says it was legal under Catholic “canon law” it is protected by the 1st amendment of the US Constitution and the free exercise of religion.  Church documents obtained since the transfer, including correspondence between Dolan and the Vatican, show that Dolan created the trust to keep US courts from compensating victims.”

“Both of Randa’s decisions are being appealed.”