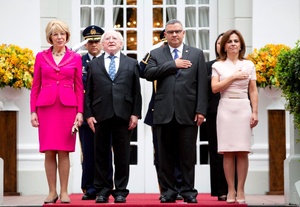 On the fifth day of Squee’s 12-day official visit to South America (Mexico, El Salvador and Costa Rica but NOT Nicaragua), a return of sorts.

The efforts made by Mr Higgins to raise awareness of the killings in El Salvador {during the country’s civil war] helped influence the Irish foreign minister James Dooge to sign the Franco-Mexican agreement that recognised the left-wing guerrilla group, the FMLN, as a legitimate political force.

They [an Irish delegation that also included Niall Andrews FF TD and FG Senator Patsy Lawlor] were initially refused entry into the country but were later allowed in. They carried out interviews with Jose Napoleon Duarte, the country’s president, and Jose Guillermo Garcia, the defence minister, and examine the remains of victims of the conflict to report back on the atrocities internationally.

Very Little To Zagreb On To