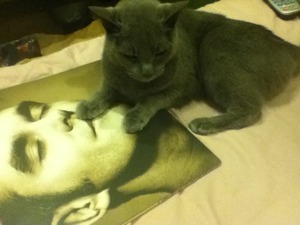 I am reading Morrisey’s Autobiography and on page 286 he tells us that in 1995 he moved into a house on Fitzwilliam Place, Dublin 2…

“I dart about Dublin in the Saab which I park night in a lock up in Lad Lane. Dublin life is a is a steady focus on pub culture and simple pleasures. The streets are safe and it is difficult not to make friends. Instantly I find my own stray cat, who is white somewhere near the blackness of dust.

He patiently waits for me every morning but disowns me once he is fed.

There will be less suffering in his eyes as the weeks pass, yet his business down Dublin’s back alleys is of more concern to him than the variety of cat basket enticements that I lay out for him should he want to edge in permanently. But he doesn’t. I never fail to supply daily sustenance but he equally doesn’t fail to be at his appointed spot, full of simple devotion.

The inevitable morning draws me to the large Georgian windows from which I see his pathetic, half-flattened body in the middle of a deserted street. I race outside and lift his body up into two large bath towels, the body now lifeless, yet softly in my arms for the first time. His short life now over, as death always wins.”

Tomorrow There’s A Referendum In The UK On Voting Reform