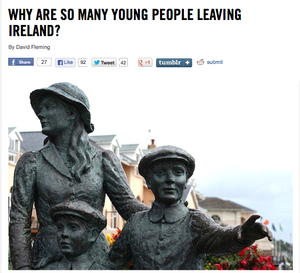 One of the government’s recent moves that has affected those looking for work was cutting grants for third level education. This has meant that students in low-income families are forced to apply for low-skill jobs rather than gaining qualifications that help them clamber up the employment ladder. When it comes to masters degrees, financial support has been cut entirely.

You could, of course, ask the bank for a loan, but they aren’t particularly enthralled at the idea of lending anyone any money at the moment, and it’s getting harder to find part-time jobs to support yourself while you study.

Other government policies include slashing budgets for community-led projects and business development, as well as initiating internship programmes like Jobsbridge, which offers opportunities like learning how to stack shelves at Tesco or fit tyres for Quikfit. That might sound vaguely positive, but the government foot an extra €50 on top of the dole for anyone taking part in the scheme, giving the companies full-time workers they don’t have to pay, meaning that there’s no real point in employing anyone on a proper wage.

However, perhaps the most extreme measure was the government’s decision to almost half dole payments for people under 26 last month…

Why Are So Many Young People Leaving Ireland (David Fleming, Vice)