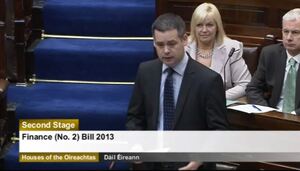 Sinn Féin’s Pearse Doherty spoke during the second stage of the Finance (No. 2) Bill 2013 just before noon today, in which he revealed Sinn Féin have received an anonymous copy of secret recordings involving senior Anglo Irish Bank officials.

This is what he said in relation to the matter:

Pearse Doherty: “Minister, I think in the interest of full public disclosure as a public representative, I think it’s important at this point to make a statement in relation to the Anglo Tapes. Within the last number of weeks, Sinn Féin was anonymously sent a copy of secret recordings, involving senior Anglo officials at Anglo Irish Bank. The majority of these recordings are not currently in the public domain and cover a period between February and September 2008. On the advice of senior counsel, we have taken the decision not to release the tapes at this time. I have made them available to the Garda Commissioner [Martin Callinan] and to the Governor of the Central Bank [Patick Honohan]. And I have personally hand delivered them to Garda Headquarters in the Phoenix Park and to the Governor of the Central Bank’s office this morning. We have also retained a copy of these tapes with my solicitor with a view of publishing them at a future date, as a publication of these secret conversations are in the public interest. The Government must move now speedily to the establishment of a banking inquiry. There is public demand for truth, people want to know what was going on within the banks. And the contact between senior bankers and the Fianna Fáil government in the run-up to the guarantee..”

Doherty: “It is always…”

Ceann Comhairle: “Could I ask you deputy to move..”

Speak over each other.

Doherty: “It has always been my view that the Fine Gael government had more information in relation to the bank, prior to the guarantee, than they have previously disclosed. I move the adjournment on this.”