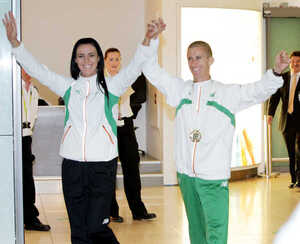 Aoibhinn Ní Shúilleabháin spoke with Rob and Marian Heffernan on her show on RTE Radio 1 on Sunday.

She specifically asked him about that racist tweet controversy.

Aoibhinn Ní Shúilleabháin: Rob, you’ve also found yourself though in the middle of a controversy as well and partly to do with that way that you’re a national focus now. Tell me about the tweet that you sent.

Rob Heffernan: Aw, you know looking back it was the biggest mistake that I’ve made you know since Moscow. Like I remember just sitting down on a Tuesday night at home you know and I was just very very busy I was just back from Dublin and I’d a load of stuff on and then you know obviously the case of the child presumably been kidnapped was all over the papers and I just responded to a twitter feed on twitter and said you know it was disgraceful and you know ship ’em out and it was just me being ordinary at home thinking of Madeline McCann and then the kneejerk reaction to it then is that I was being called racist and that it was disgraceful and..

A Ní S: “Were you surprised by that reaction?”

RH: “Yeah. I was very hurt like because you know like I’ve trained all over the world you know and I’ve really good friends all over the world in all different communities and I, you know when I bring it back, I reacted to thinking a child was kidnapped and it was stupid because I never read all the facts. And I threw it out and I apologised and still people are bringing it up to me and it is. You know I didn’t sleep over it . You know I was just surprised that people were ready to tear me down like and have pops off me and you know I apologised I was very very sorry for it you know.”

A Ní S: “Marian, what impact did that have on Rob? That reaction?”

Marian Heffernan: “Being married to him, and living with him and knowing him, he’s very much not a racist. Aw, like you know reading some of the stuff that people were saying like. It was just, felt unfair you know that like. This, this kinda title was put over him, and it was so far from what he actually was and his character. Oh my God, people have got it so wrong. You know the tweet was stupid of him obviously.”

A Ní S: “Rob, as you’ve said it was kneejerk and it was a harsh reaction but what have you learned from it?”

RH: “The biggest lesson from me out of it is that going back to you know to the reaction that the public had to me, you know I’m just an ordinary fella from Cork and this really drove it home to me that you need to be more responsible, you are a public figure now and you can’t just be throwing out comments like this. You know I have to think of the bigger picture and the impact it can have. It’s after giving me a big realisation you know in a negative way now of where I am now and that I have that that…”

RH: “…that responsibility being a public figure. You know I apologised and I’m only human you know, people make mistakes and people need to get over it as well like you know and move on like you know.”

A Ní S: “That responsibility, is that distracting going back into your training?

RH: “No. I’ve apologised and I’ve explained myself. If anything, it’s after making me more focused because you know everything was so good. And you know there was probably a point there where I thought I could walk on water everything was so positive like and ah. I think, no it gave me a big reality of the world you know and when I go back training it’s like oh no. I’m very very focused going back and I’m very driven and I know what I’m about, I’ve apologised and it’ll make me focus more on what I’m good at like. I won’t being commenting on any other things moving forward.”

Language used by Rob Heffernan to justify his racist tweet seem to normalise anti-Roma sentiments- he is ‘only human’ http://t.co/UmpXLf0UUj