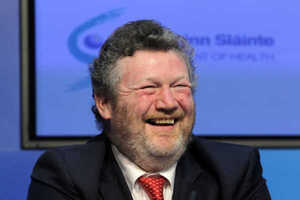 Valerie Cox was on Today With Sean O’Rourke this morning to talk about allowances given to 191 senior managers in the HSE, which were revealed by the HSE in an audit presented to the Public Accounts Committee.

Valerie Cox: “Well it’s quite extraordinary really because we’ve got details, for the first time, of the allowances being paid to 191 senior managers in the health services. And what’s very startling Sean is the full remuneration package of these senior managers. Now let’s put it in context, public pay policy states ‘one person, one salary’. And the salaries for public health service staff have been set out clearly in Department of Health salary scales. Now, under no circumstance they say, can an employee receive a greater amount than that specified. And it also states that public funding may not be used to top up or supplement these rates. But the HSE has found that this is exactly what is being done…”

Cox: “..with both HSE funds and private funds.”

O’Rourke: “So, what, they’re actual, specific regulations, providers are not allowed to subsidise salaries?”

Cox: “Not at all, and in fact it’s very tight because even if a member of a public service body sits on a State board, they’re not paid for that when they’re representing their organisation or their own sector but the amount of money involved is quite staggering. Now we’ve got two separate sections here. We’ve got money that’s been coming for HSE funds up to now. And that comes to €3.2million being paid to senior managers. And then we…”

Cox: “36. It’s 36 agencies, yes. And then if we look at another 13 agencies, they’re paying extra funds to their senior managers from private sources and that comes to €914,472. Now, we’ve got lists of the kind of things that this money is going on. Examples of allowances paid to these senior managers. They get allowances for their qualifications, there’s clinical director’s allowances, on-call allowances and so on. But they also get paid health insurance, permanent health insurance, income continuance premia, motor allowances, on-call allowances. And, if we break it down a little bit, now we don’t have full details about exactly who’s getting this but contributions to private pension schemes, where the salary holder would not be covered by the public sector and that, in some cases, comes to 46.6% of their salary – which is an absolutely huge amount. Some consultants are being paid for holding administration sessions, that kind of thing. Now I’ve got a breakdown of some of them here. Health insurance, 12 managers between them are getting €34,654. If we look at an extra duty allowance, 15 managers are getting €82,436. Now an on-call allowance, this goes to about 44 people and it works out at about €5,000 each. A clinical director’s allowance, 35 people getting €1,113,000. A motor allowance, now the motor allowance crops up in a lot of these agencies, a lot of these hospitals and seven people are getting €90,000 between them. And that pension scheme? We’ve got 29 people getting €346,000. Now that is from HSE funds, Sean.”

Cox: “Now, private funding. Fairly similar but some of them are a little bit different. In one case, the CEO of a board of directors was given an extra allowance to lead a fundraising campaign, in another instance…”

O’Rourke: “Are these agencies and individuals going to be identified?”

Cox: “Well, they’re not identified in the report that’s been handed in this morning and which they’ve given the go-ahead to publish. Their names are not there. But, actually, if you look at a list of the agencies you could probably nearly identify some of them. Three senior managers were paid for work carried out over and above their public service contract. So, Sean, you’d have to wonder, you know, when, how much work do you take on that you’re actually being paid for, as part of your salary?”

O’Rourke: “I see just one here on the list you’ve got Valerie. A director of a haemophilia unit allowance, one agency, one individual, €43,000.”

Cox: “It’s a top-up, you’ve got to remember that it’s not their basic salary and the basic salaries, I mean they’re on public record and they would be fairly generous salaries already.”