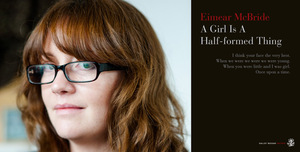 Irish-British writer Eimear McBride has won the inaugural £10,000 Goldsmiths prize for her “boldly original and utterly compelling” novel A Girl is a Half-Formed Thing, which was originally rejected by publishers for being too experimental.

One of our own and a credit to her –

“Being an Irish woman I am very interested in issues around sexuality. Growing up there as a female was a very difficult thing.” The utterly apposite term “girleen” which recurs in her book encapsulates perfectly these attitudes – the double diminutive speaking volumes.

McBride spent four years in Cork. This was not without its own difficulties. She found our second city very insular and clannish. “It was very hard to get to know people. If you weren’t related to them or went to school with them they didn’t want to know”. Also, her dealings with the local arts scene didn’t go too well: “everyone is so bloody territorial, nobody wants to help anyone else out”.