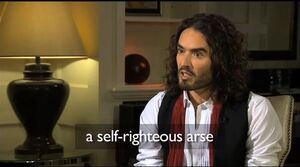 On Wednesday evening social media was buzzing with rumours that the comedian Russell Brand had visited a loyalist protest camp in North Belfast.

It has been confirmed to BBC News NI that the visit did take place but no one on Russell Brand’s team wished to comment.

Loyalists have been protesting out at Twaddell Avenue since July following a decision to restrict an orange parade.

Meanwhile, new subtitled footage (above) has emerged from his recent Newsnight interview with Jeremy Paxman.